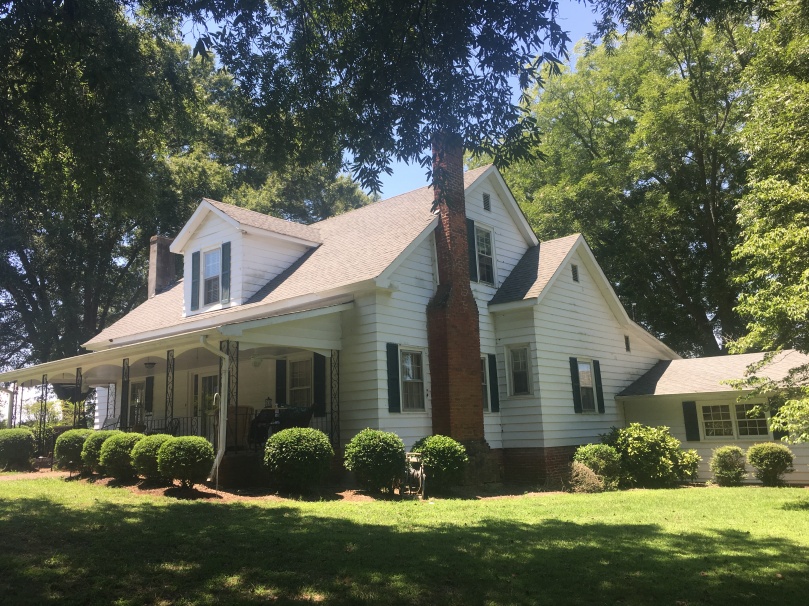 The house I just bought was built by slaves. I didn’t know this when I bought it. I knew that that the original portion of the house was built by Andrew Jefferson Weems in 1851.  But it’s a modest little farmhouse, so I figured he might have owned one or two slaves, if any.

After settling into the house for a couple of weeks, I decided to go online and track down Andrew Jefferson Weems, who had moved to Pine Log, Georgia from Abbeville, South Carolina in 1851. It was easy to find the 1860 slave schedule through ancestry.com.  At my kitchen counter I looked down at my Iphone and saw a list of 20 slaves owned by Andrew Jefferson Weems in 1860.

The slave schedules list ages and genders, but no names. The slaves were not given that dignity. They were property. But I found the census of 1870, after they were freed, and looked for African-Americans born in Abbeville, South Carolina and living on the same or adjacent property to Andrew Weems in Pine Log.  Their names were Larkin and Lucy, Wiley and Tempy, Anthony and Rebecca, Wade and Caroline, John and Tamor.  There was a 100-year-old woman whose name I can’t find, and some children: Hanner, Cosea, Warren, Arthur, Ella, John, Alford, Benjamin.

I also found that in the 1850 slave schedule, a year before Weems moved to Georgia, he owned 18 slaves in Abbeville, so it appears that he brought most of them with him.

I feel complicit in stealing their labor. The land around the farm is so beautiful, rolling pastures as far as the eye can see, and I wonder how much of that was cleared by Larkin, Wiley, Anthony, Wade and John. I wonder if they had enough to eat, if they had shoes, if the children had clothing. I wonder how they kept warm in the winter.

I don’t know where the slave quarters were located, or where the slaves and later free African-Americans were buried. My neighbor Jim tells me there is an overgrown cemetery across the street, and I’m going to find it.

I wonder what it was like on this farm between 1861 and 1865. Andrew Jefferson Weems and his two grown sons, Samuel and Francis, all served in the Confederacy. All three survived the war and went on to live long lives.

The farm is not far from Cassville, which was burned by Sherman’s troops in 1864. There were competing guerilla militias skirmishing and foraging in this area in 1864 and 1865. Food was scarce. Andrew’s mother Agnes and his first wife Agnes Elizabeth both died toward the end of the war, the wife in 1864 and the mother in 1865.

I wonder if the slaves continued to work the farm throughout the war. I wonder about the relationship between the slaves and the slave-owners, whether there was any attachment or just hate.  I wonder if any of the slave children were Andrew’s or his sons’. I wonder if the slaves were allowed to attend Pine Log United Methodist, where Andrew and his family attended. I don’t think they were buried there, because I’ve been to the graveyard and seen the Weems tombstones.  But Jim tells me that there are African-Americans buried in the Pine Log cemetery, so I need to go back and look again.

I feel like it’s important to know these individuals’ names and imagine their experiences and their stories.  I sit in the shade of the trees they planted, leaf canopies stretching 15 yards each, encircling the house in green and shade. In the fall I will gather bushels of pecans.  What is this inheritance?